A total of 57 hybrid seeds were obtained. After stratification in winter, the seeds were sown in the ground in April 2011. Seed germination of this hybrid combination is high. In the second year of life, after selection for mildew or vigor, the best seedlings are transplanted to the breeding plot. A total of 10 hybrid seedlings were planted.

The seedlings of this hybrid combination are mostly medium or vigorous. The vine ripens early and well. Seedlings started fruiting in 2011-12. Most seedlings are dark purple or black in color. A small number of seedlings turned out to be with a white berry. The shape of the berry is round or slightly oval.

In terms of size characteristics, the hybrid forms of this crossing combination did not go far from the paternal variety Neptun. The mass of berries is 8-10 grams, the mass of signal clusters is 200-400 grams. Over the years, the bunches have increased to 600-800 grams or more.

Berries practically did not increase. Berries in linear dimensions larger than that of the parent variety Podarok Zaporozhye have not yet been. According to the ripening period, hybrid forms were divided into two groups: early and early-middle. 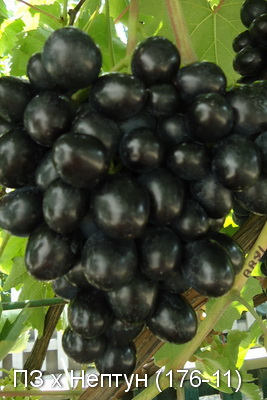 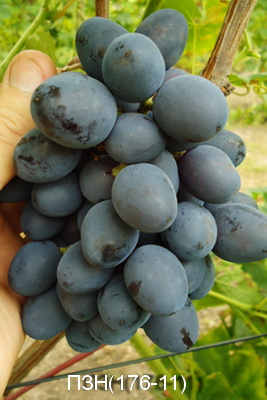 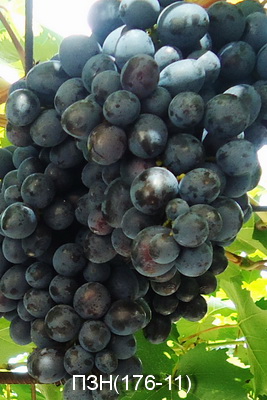 The most interesting in terms of its characteristics was the form Gift to Zaporozhye x Neptune (176-11): productivity, early ripeness, disease resistance, high sugar. All fruiting seedlings had a harmonious taste of berries, dense or medium-loose pulp of the berry. There are no forms with a nutmeg aroma. Cracking is weak and rare. Forms prone to cracking removed.

Resistance to diseases of hybrid forms is increased, is in the range of 2.5 - 3.5 points on the scale of susceptibility. Seedlings did not hide for the winter. In the winter of 2011-12 (-34 degrees C), the seedlings were frozen to the level of snow. In 2012, they recovered well. Frost resistance of seedlings in this combination is about -24 gr.s.

Great vigor, early ripening of the vine, resistance to mildew and gray rot.

There are very few seedlings of early maturation, many forms with PHTC.

In this hybrid combination, I selected only one form as an elite for further study and testing in different climatic zones - Memory of the Heavenly Hundred: PZ x Neptune (176-11).

When crossing very worthy parents (each variety is very good in itself), one can only hope for luck - heterosis according to some characteristics (reproductive - yield, somatic - large-fruited, adaptive - resistance to abiotic factors).

For testing at the NSC "Institute of Viticulture and Winemaking named after A. V.E. Tairova” only one form was submitted: Gift to Zaporozhye x Neptun (176-11).

Grape form of Memory of the Heavenly Hundred submitted for state variety testing in 2020.